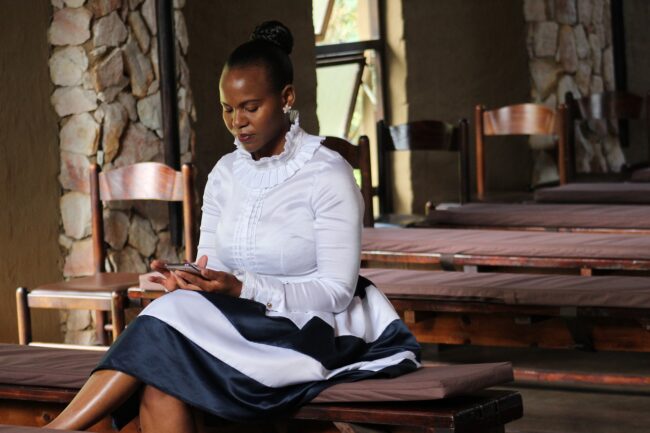 It’s 2022 and the world is hopeful that this will be the year the COVID-19 pandemic finally ends. However, with the real possibility of new variants, it is anyone’s guess how much longer this will go on. What we do know is that 2021 was a difficult year for almost everyone, and it was particularly difficult for women. But why has the brunt of the pandemic fallen on women’s shoulders?

Gendered roles — and the social norms that influence them — are a big part of the answer. We see this in women’s disproportionate representation on the frontlines, particularly in health care and other essential service roles that cannot be performed at home. These roles put women at greater risk of illness. In many cases, women’s roles have also compelled them to drop out of the paid workforce to take on increased household responsibilities, including childcare, home schooling, and caring for sick and elderly family members. The resulting costs to women’s workforce participation have reversed decades of progress, and this reversal will have long-lasting costs.

But even before the pandemic, women’s economic contribution was constrained. In most sectors and geographies, women do not have the same opportunities to participate in economic activity as men do. When they do participate, they earn less than men. Inequality of opportunity, such as unequal access to education, health services and finance, inhibit equal chances to succeed. The gender norms that often underlie these dynamics slow down progress toward equitable development, economic inclusion and justice, resulting in income inequality, particularly in emerging and developing countries.

Gender inequality is thus not a symptom of poverty, but rather a fundamental cause. And COVID-19 is the latest reminder that the norms constraining women’s economic participation need to be addressed in global development efforts, including in financial inclusion

Inclusive finance affects and is affected by gender norms

The inability to access financial services is one of the inequalities that limits women’s economic participation. Gender norms are, more often than not, the root cause of why women continue to be underserved or excluded from financial services and why even when financial access is improved, welfare benefits to women may be minimal.

For one thing, gender norms shape women’s choices and behaviors and influence what women can and cannot do. They often limit women’s control over household resources, constraining women’s demand for financial services. They also create barriers to the prerequisites for engaging the formal financial system, including participation in the productive economy, financial decision-making authority, mobility outside the home, and the ability to own or access assets like mobile phones. In other words, gender norms limit women’s ability to acquire the income, technology and capabilities to access and use financial services.

And gender norms don’t just affect women’s behavior but the behavior of all actors within the financial system. These expectations and informal rules affect the design and delivery of services and impose barriers to women’s access and use of financial services due to biases in algorithms, inappropriate product offerings, and inadequate delivery channels.

For example, imagine a financial service provider (FSP) wants to develop a new digital credit product, so they hire a firm to help them using the FSP’s internal data plus additional data sources such as utility bill payments, mobile phone top-ups and the size of social media networks. The problem is that women will have distinctly different data trails than men, as they may charge or top-up their phones less often or use fewer bill payment services (as bills are more likely in the husband’s name). Is the data scientist aware of this difference? Do they account for it in the algorithm design? Without being aware of gendered roles, it is likely the algorithm will be built based on available data, rather than an understanding of who produced which kind of data. The result is women may be excluded from the new product.

Informal rules also influence how formal rules are developed and implemented, including the rules shaping financial systems. Legal systems and policy frameworks — both at the state level and within the private sector — cannot be assumed to be gender neutral. For example, inheritance rules that favor men may reduce women’s ownership of assets, making it harder for them to access financial services like credit. Identification requirements for opening accounts that necessitate engagement with government agencies or male guardian approval may be difficult to meet where norms restrict women’s mobility and financial independence. Even when formal rules proactively aim to treat women and men equally, informal rules often mean people or organizations continue to discriminate against women.

All of this is a concern of course for women and their families, but it is also a concern for society as a whole. Women’s labor participation has important benefits, including contributions to overall economic growth, higher productivity and greater economic diversification, which, in turn, supports resilience.

What can be done to address gender norms?

Norms can and do change. Over time, attitudes, expectations and behaviors evolve. For example, evidence largely emerging during the pandemic has shown that direct transfers to women’s accounts can increase women’s decision-making autonomy and paid work.

In Bangladesh, the HerProject helped factories transition from paying their employees in cash to making digital payments. The program coupled gender sensitivity training for employers with training programs that taught female employees how to use their new accounts, carry out financial planning and discuss finances with their families. Employers were asked to provide workers with a formal letter to share with their families saying they needed a SIM card and a phone.

By the end of the program, half of the factories’ female employees had opened mobile money accounts, and one in five had started saving regularly. Beyond inclusion, female workers who were being paid digitally felt more in control of their wages. There was a 19 percent increase in joint decision-making regarding the use of women’s salary and a 10 percent decrease in the number of women reporting that they handed their salary to someone else.

Similarly, self-help groups in India offer a platform for women’s social and political participation. Evidence suggests this has contributed to change in attitudes around how women perceive their own power in their households and communities.

Financial services can contribute to addressing harmful gender norms. But this can only happen if funders, market facilitators and market actors acknowledge and understand gender norms, and invest in efforts to address them. By understanding and accounting for discriminatory norms, development actors can contribute to building an equitable financial system that allows women and men to benefit from economic opportunities equally.